It is time to celebrate the fervor and isolated intrigue of the Burmese contemporary artists.  For years, the erudite and creative class of artists in cities like Yangon have been working, without much foreign interruption, to further their knowledge through production.  Despite political strife, which has become a daily reality with its censorship boards and random imprisonments, the artists communicate when and where they can.  Their audience remains equable yet insufficient.  The world at large exists unattached to a country with so much in resource yet so little in export.  Writers like Htoo Lwin Myo are now transcribing thoughts in English to reach a wider audience.  Regardless of attaching oneself to the global language of English, Htoo Lwin Myo’s thought-process remains unique and uninhibited.

Consider the setting.  A shopping mall. Two artists, a writer and an incentive to share.  Place yourself, if you will, in their shoes.  The manifestation of audience within the contemporary confines of a culturally void institution like a shopping mall has symbolic meaning.  The mall does not foster a creative energy that a gallery or even the streets of Yangon might.   But performing in such a space does support a kind of irony – playing on the lack of intentional audience.  The endless struggle to be as free in their art as they are in their minds.  Read on; the words of one writer conveying two Burmese artists’ challenges through performance and the realities of action and happening in a city such as Yangon.  Introduction By Nathalie Johnston

Before the madness, situated in the course of recent history, when clinical dialogue was interlocked with human demeanor, an artwork had some kind of dialogue – it affected the reader/viewer just as a mad person does the populace. Yet, it maintained the dialogue in balance. So, are we saying that an artwork may be marginalized whenever it questions the status quo and common sense? How does an artwork come to comply with common sense? Nowadays Burmese contemporary art (here action art) has some features of being carnivelesque: the counter attack on “High” contemporary art. The socio-politically motivated precursors and the way they dealt with the iconology was eventually de-throned by new generations. I think that the Burmese action artists who I will write about possess these tensions in every respect.

Titled “3 Performances,” the action art event was held on October 24, 2010 at Junction Center Shopping Mall in Chinatown in Yangon. Though the event was planned with three artists, namely Mrat Lwinn Htunn, Pann Che and The Di Htarr, the latter artist could not show up at the event due to a road accident. However, the available artists, in addition to myself, performed and documented the work respectively.

The event witnessed numerous, intersecting tensions. Namely tensions between the nature of performance art and conventional ways of organizing said event in galleries, including the need of accepted audience vis-à-vis invitation and official censorship passes.  As a result, the action art events are tamed with specific artists and even audience for whom ceremoniously conceptualized art becomes an institution in a given art arena. Hence, other superimposed tensions, as expressed above, for artists themselves and between them. Being long war-torn and currently undergoing a series of political tribulations, the military-ruled Burma has, if not superficially, changed the impact of IT and globalization while art remains a representation of the oppressed and the deliberated.  Even some pioneer artists in the space of action art still dictate a political motivation through their own works, just as artists do so in other Southeast Asian countries as noted by Thanavi Chotpradit in his essay on the rise of performance art in Asian countries:

“ …This phenomenon doesn’t happen only in Indonesia, but it is the same situation that other third world countries have confronted. In exhibitions and International Art Festivals, the presented images of art from these third world countries are usually done in the aspect of social and political issues, if not the aspect of the subject matters will be about something completely different, such as the portrayal of culture and ancient tradition. This seems like a symptom of “the passions for distant, exotic lands,” left from the days of Colonialism, which has become an attempt in trying to present a country’s image more than an art of that country. It’s a matter of consideration that the creations and representations of this certain identity mean that all nationalities and races, which are looked at/ look at themselves as the “marginal ” will become more accepted, or it is just a set up “ trend ” …”.

Considering the choice of a public arena like a shopping mall by the three performers imply another ongoing trend in the way artists demand anti-institutionalized knowledge. Pann Che’s 4th work titled “The Years” composed of 20 t-shirts.  Printed on front side were different birth years of family members and friends. When we entered into the mall, Pann Che started to browse among the public folk whose birth date matched with the years on the t-shirts. The people in corners and lifts were asked by the artists which is his/ her birth years and if the birth year is one printed on said t-shirt. Pann Che gave the shirt to audience members with the matching birth date.  Some minutes later, both Pann Che and Mrat were stopped by security guards to and invited to the manager’s office where the artists proceeded to explain to the manager about the key factors of performance art. Despite their efforts, the artists were denied permission to allow the event to continue.  Pann Che finished his work on the spot but Mrat went on with his work titled

“O!Picnic(Perfume)” – an ongoing series of performance works under the name O!Picnic which he has explored over the last 2-3 years.  “O!Picnic(perfume)” consisted of as purchasing and spraying an air freshener can while walking through the mall. Meanwhile, Burmese policemen interrogated Pann Che as they seized some t-shirts from him.

Though the artists did not assume any political motivation, the participant artists were still defined as activists, perhaps due to the moment as well as the results of a historical artistic process in whose context we would be able to understand its meaning or political allegory.

If we take the action art realized by Burmese artists was just the echo of a political turmoil, that echo would only be the inherited concept of the art and literature in pre-Socialists era; the concept of art for peoples’ sake and art as a weapon against aristocrats.

However, the tensions seen in “3 Performances” witnessed the Burmese contemporary art rising from the mainstream in a way the “High” contemporary art myth was de-throned by some anti-institutionalized events, which are, in effect, the rise of cannibalism… Htoo Lwin Myo

Htoo Lwin Myo is a writer and poet living and working in Yangon.  He often translates artist statements and show catalogs, fostering the communication of a local contemporary art scene with a greater regional audience. 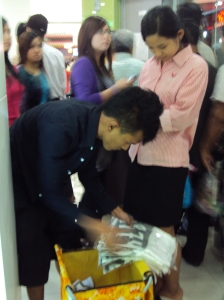 photos 1 pannche offering the t shirts to an improvised audience 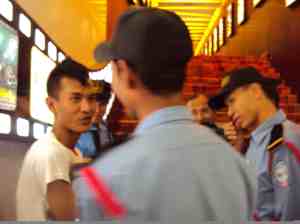 2 Pannche searched by guards in the mall

One thought on “3 Performances”