In June, TS1 Yangon hosted It’s a Long Way, a group exhibition of 7 Myanmar artists. An intriguing combination of sculpture, photographic collage, painting, mixed-media, and video, it was titled based upon the content of the artworks.

Waimar Nyunt created a video/installation based on the changing streets – too many cars and parking spaces taking over what used to be rows of tea shop tables and benches. Zar Min Htike built paper mache sculptures, grotesque amphibious human figures, matching those in his two large paintings…his demons, which haunt him from his days in Insein prison, matching his dismay with the naked aggression of the military officials. Lwin Oo Maung painted portraits of the Buddhist Zodiac – asking why we bother to worship these creatures when there are so many more important things to concern ourselves with in this world. Ko So created large-scale collage pieces that mimicked Buddhist life cycles and philosophies, as well as our own births, lives, and deaths. Zoncy photographed the old and new buildings, and juxtaposed portraits of working women on top of the buildings. Many women work on the streets of Yangon, selling and lifting goods while caring for children. Chaw Ei Thein paints to draw attention to those who are often not seen. Not only the bordering states of Upper and Lower Burma and the many languages, cultures, and religions they encompass, but also the young boys on the street, who sell cigarettes and society forgets that they are who they fight for.

But it was May Phue Thet‘s The Burden of the Bride that really brought to light the plight of the young woman in Myanmar. That she articulated her mistrust at the prospects of marriage, as well as the materialism that has recently arrived among her young female peers, showed in her incredible insight and maturity into her own life as a 21 year old art school graduate and an apprentice seamstress in her Aunt’s shop in Mandalay.

The dress is the 3 pieces of the traditional wedding gown or formal wear worn my women. The shirt which is made to fit the bodice, the jacket, and the htamein or long sarong-style skirt. On each piece are sewn hundreds of pearl beads, hand-stitched onto the fabric. The pieces weigh 24 pounds altogether.

Here is what May Phue Thet said about the piece:

Changes comes very quickly for a Burmese woman. Before marriage, she is very hopeful that she will live a happy life after marriage. But once married, problems come all together and hardships become bigger and bigger. That is what happens before and after a marriage. Being a bride means being on the threshold of a burdensome life.

She also explained to me that in her Aunt’s dressmaking shop, young women come in and choose dresses with more and more beads and embellishments. The dress then becomes very heavy and cumbersome when walking, but they insist that what is sewn onto the outside reflects the love and beauty of their marriage. May Phue Thet is young, sharp and skeptical. She finds this reasoning almost comical, which made her question the very reasons for getting married in the first place. So she created a textile work to address the irony of the design and the act it represents. 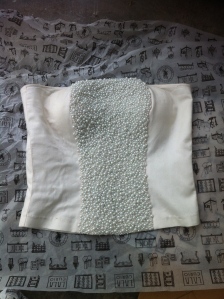 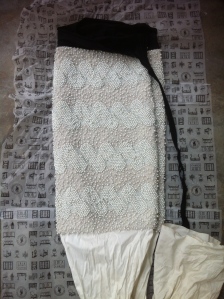