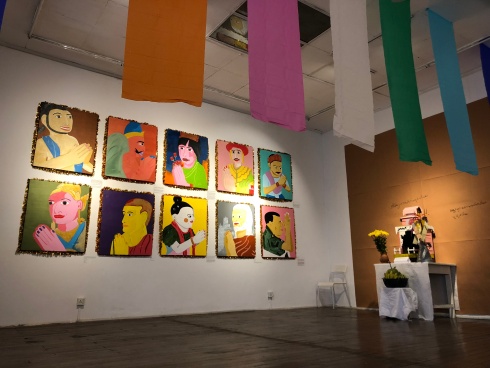 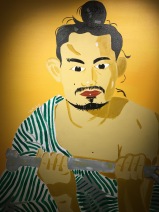 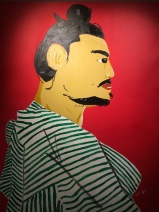 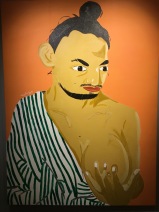 Artists worship themselves. They are their favorite subject. Their bodies and minds are the realizations of their existential identities. Sharing stories through artwork creates a power dynamic between audience and viewer. In some cases, the viewer begins to worship the artist.

The Nat is spirit with roots in Animist practices and maintains strong ties with millions of people all over Myanmar. Nats have settled into Buddhist and Hindu practice for over 2000 years, in order to appeal to the superstitions and traditions of those who believe their daily life depends on the mood of these Nats.

It took time for the Nat spirit worship to catch on, to occupy homes and gardens, mountaintops and rivers. It takes years for an artist’s practice to inhabit a space in the minds of the people as well. A kind of hero worship may take place, and that artist could live on in history. Or perhaps a few followers and supporters will be the only people keeping alive the memory of that artist’s identity.

In Lwin Oo Maung’s first solo show, the artist meets the spirit world. Though these spirits are not of the official 37 Nats sanctioned by the Theravada Buddhist practice in Myanmar. These are an unofficial pantheon of Nats, worshipped and honored by considerably smaller groups of people. He chooses 10 spirits, one of whom is still alive, who are defined by their power over human beings. The cause of worship is the fear that the Nat will feel disrespected or punish misdeeds. The Nats want absolute dominion over human aspirations. The Nat may prove to be hostile and destructive at any time.

Similarly, the artist hopes to impress on his supporters the power of an idea. The influence of that which can change a person’s personal goals, his soul, and his body. Lwin Oo Maung transforms his own body in three self-portraits. In these portraits, he is draped in a standard issue Myanmar Army blanket. Used for bathing, sleeping, and wrapping the bodies of the dead, this blanket is the constant companion of a soldier. As a former enlisted solider in the armed forces (Tatmadaw), Lwin Oo Maung accepts this part of his life as an aspect of change, one that no longer defines him but helped him to determine his future as an artist.

After 10 Years is an exploration of an artist’s interests. His own body and identification as an artist; the spirits and historical figures worshipped by his countrymen; and a fun and energetic vision of what it means to reimagine yourself, your future, and the spirits.